Last week’s Graduate Outcome Survey, which looks at employment rates about four months after course completion, showed that full-time employment rates continue to improve. However, the proportion of new graduates looking for full-time work at this time is still high by historical standards, as the chart below shows (many of them have part-time jobs; this is not necessarily unemployment).

At the margins, there are things universities can do to make their graduates more employable. They can offer courses in fields likely to be in labour market demand, and they can offer work-integrated learning to improve graduate employability. Both were happening under the demand driven system.

But unless there is overall job growth graduate employment is unlikely to improve. When the labour market is tight the first thing to go is new entry-level positions, and so this disproportionately affects recent graduates. The effects of downturns are visible in the chart on annual growth in professional occupations and the labour market overall.

The good news is that growth in the professional labour market has fully recovered from the post-GFC crash and the second crash that started in mid-2012.

A couple of years ago the ABS started regularly reporting qualification levels as part of its labour market survey. I haven’t used this data to date because the time series was so short, but it is now worth a look. Overall bachelor degree employment (in any job) grew only modestly in 2017, by about 90,000, of which 60,000 was full-time. For graduates aged less than 30, our main group of interest, growth was weaker still, about 4,000 overall, of which 3,000 was full-time.

Some caveats are needed on these figures. As we start trying to examine smaller groups in ABS surveys the risk of sampling error grows. Also, these are stock figures, and total flows are always much greater than total increases or decreases suggest, due to movements in and out of the labour force and between part-time and full-time. 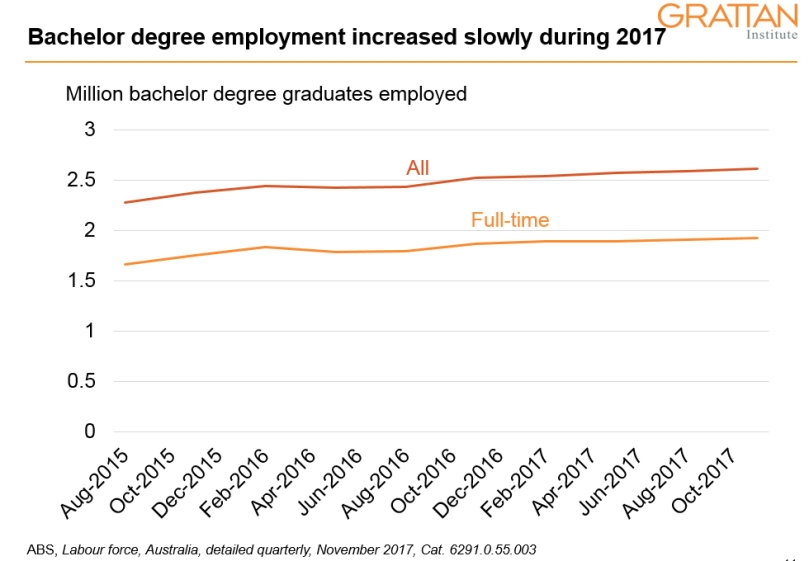 The other flow to keep in mind is bachelor degree completions. The enrolment boom of 2009 to 2014 saw these start growing fairly quickly from 2011, with the annual total going from 112,000 in that year to 136,000 in 2016. But commencing bachelor degree numbers were flat in 2015 and 2016, and the applications data suggest that 2017 numbers will be similar again. This suggests that we are headed into a period during which completions will not increase sharply.

New graduates since 2009, and especially early this decade, had some bad timing. Not only was the graduate labour market struggling due to broader economic conditions, but policy decisions made during the previous boom years had seen many more graduates looking for a shrinking pool of jobs.

The boom times aren’t back for graduates. But with completions stabilising, professional job growth strong, and graduate employment levels improving there is little near-term danger of things getting worse, and some cause for optimism.