A couple of opinion pieces about university performance funding last week suggested that the government’s policy is aimed at increasing student places with population growth. That may be the impression the government is trying to give, but their policy provides a financial incentive to decrease the number of student places.

The government’s promise is to increase nominal funding for bachelor-degree places in line with increases in the population aged 18-64, for those universities that meet performance targets. But because percentage population increases are likely to be below inflation,  total Commonwealth Grant Scheme funding will decrease in real terms each year, even if universities get 100 per cent of their performance funding.

Although maximum CGS payments will probably increase at less than the rate of inflation the underlying Commonwealth contributions are still being indexed to the CPI. As noted last week, the demand driven funding calculation is still going on as well, so that universities receive the lesser of their demand driven or maximum grant amount. The practical effect of this is that universities can decrease the number of Commonwealth supported places each year and still get their maximum CGS funding amount.

The chart below illustrates the logic, using nursing as an example. Under the Wellings review recommendations, universities are pretty-much guaranteed 60 per cent of their maximum performance funding. So on the left-hand side of the chart below I have indexed the maximum funding amount to that and divided it by the indexed Commonwealth contribution. Next year a university could offer 4 per cent fewer nursing places than in 2017 and still get its maximum funding amount. 100 per cent performance funding does not make much difference. 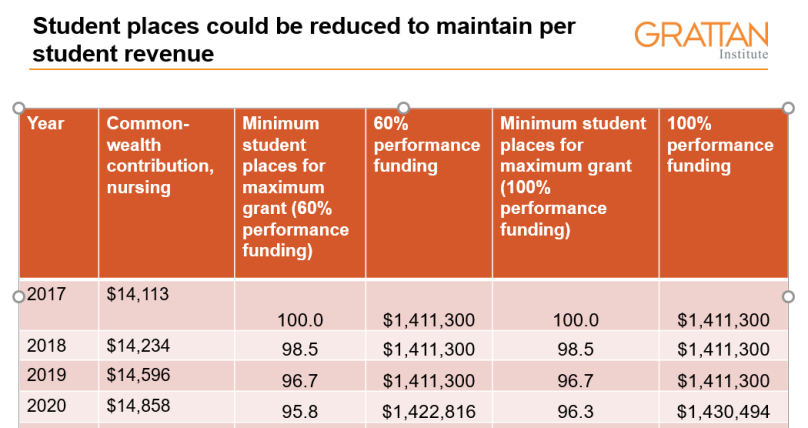 The Wellings recommendation for the performance funding to accumulate adds another layer of complexity. This means that a university’s underlying maximum grant amount will be their 2017 level plus performance funding awarded for 2020 (the reasons for this combination are explained here).

Because over time an increment of up to 7.5 per cent of their previous maximum CGS funding will become contingent, that might create an incentive to keep student places equivalent to the ‘guaranteed’ amount. Otherwise, the university could end up with student places that receive no Commonwealth contribution funding.  Any performance funding actually received could be treated as a windfall gain, not something to support recurrent expenditure on students. Under this scenario, the number of fully-funded nursing places would fall by about 7 per cent by 2022, and keep falling after that.

In practice, however, I don’t think student places will decline as quickly as these scenarios suggest.

The scenarios assume that universities maximise their per student funding. However, there is a long history of universities ‘over-enrolling’ – that is, taking more students than for which they will be fully funded, and therefore reducing their average per student funding. It was so common in the early years of this century that the government decided to penalise universities for what it thought was excessive over-enrolling. And that was when the financial incentive for taking additional students was lower than it is today – a few thousand dollars per EFTSL or less, not the entire student contribution as it is now.

Over-enrolling continues in the capped sub-bachelor market. (Although possibly these were ‘loss leader’ places leading to demand-driven bachelor degree places.)

And the marginal cost of additional students could be much lower than the average student cost. There are a lot of fixed or semi-fixed costs – libraries, lecture theatres, IT, core academic staff, administration – to which additional students can be added with little or no additional expenditure. Just hire a few more casual tutors and pocket the profits, even on the student contribution only in some fields.

Along with the financial incentives universities are, in the domestic student market, still mission motivated. Substantially reducing opportunities for domestic students would be a big decision. Universities need to be financially responsible, and eventually reducing student numbers, possibly by closing financially strained courses, will be necessary to control total expenditure. But in the short term, not expanding student places is I think more likely than significant reductions, with the small amounts of performance funding likely to be mostly spent delaying cuts to student opportunities.

The government is lucky that we are in a period of weak higher education demand, due to a demographic lull and mature-age student numbers affected by cyclical and structural factors. But when the Costello baby boom cohorts start arriving in a few years time it’s likely that there will be fewer domestic student places than there were in 2017. That will not be a good starting point for meeting that generation’s education needs.