The decline in international student numbers has many people worried about the future of university research in Australia. A recent report from the Chief Scientist predicted that 7,000 research jobs could go due to reduced teaching profits, philanthropy and corporate funding.

In this post, I estimate how reliant research is on international student profits. It combines data from multiple sources. None of them were designed to calculate this profit, so my result should be taken as being in a plausible range rather than as a precise total. But it can give us a sense of the scale of reliance on international students.

According to the 2018 ABS higher education research report that was released yesterday, in 2018 universities spent $12.158 billion on research. The ABS also gives sources of research funding, but these only explain 44 per cent of the total, with the rest coming from ‘general university funds’.

I am not going to use the ABS funding source categories, because the revenue sources reported in the Higher Education Research Data Collection can account for slightly more (50 per cent) of total research spending and include much more detail. This detail will help me avoid double counting when I use revenue line items from the 2018 Finance report to investigate other possible sources of funding (a few institutions are in the ABS survey but not the Finance report, but they are small).

The table below spells out my assumptions, all of which could be challenged. As universities give research a high priority, and there is a large amount of spending to be explained, it would be unrealistic to think that sources of potential discretionary revenue are not being used heavily to support research.

On the other hand, I need to leave revenue for spending on things other than teaching and research and to produce the reported surplus for 2018. On the ABS figures, 38 per cent of university expenditure is on research, and on Deloitte’s analysis 52 per cent is on teaching, so 10 per cent of expenditure is on other things.* 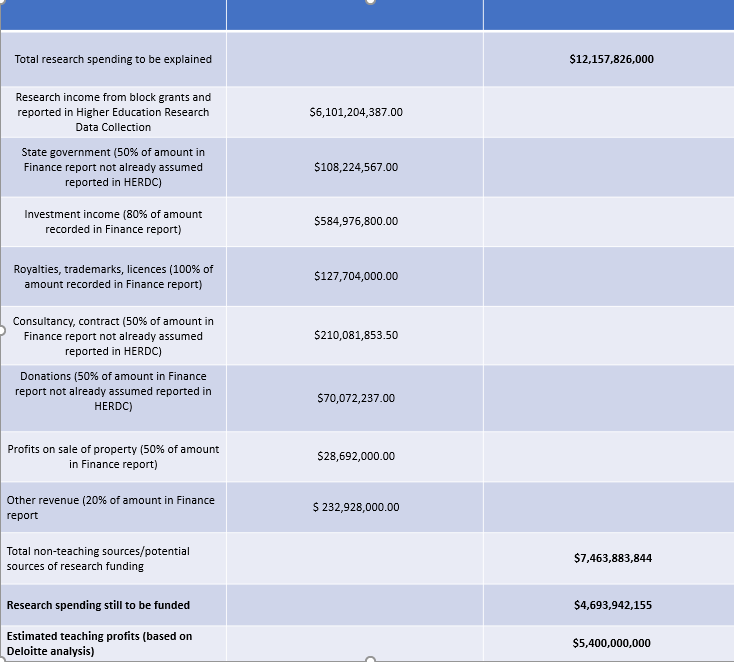 Combining research-specific funding sources with possible non-teaching sources of revenue gets me to about $7.5 billion, or 62 per cent of research spending. That still leaves about $4.6 billion in research expenditure with unexplained funding. The only major source of revenue left is teaching.

Earlier in the week I estimated total teaching profits for 2018 at $5.4 billion, which is enough to cover the unexplained research expenditure. Of that total, approximately $1.3 billion came from domestic students. Assuming 100 per cent of that was spent on research, 73 per cent of research spending is now explained – leaving $3.3 billion of spending looking for a funding source.

On fairly conservative assumptions, this means that 27 per cent of total research expenditure, or about $3.3 billion, relies on profits from international students.

6 thoughts on “How reliant is Australian university research on international student profits?”