For Australian higher education the situation of international students in the COVID-19 crisis is especially concerning. They lack the local family and social security back-ups of domestic students. It leaves them particularly vulnerable as large parts of the student labour market collapse.

And if international students have to go home or cannot pay their fees, that is the most likely trigger for a broader higher education sector crisis. At best, thousands of higher education workers will lose their jobs. At worst, many universities will need government intervention to survive.

This morning the government issued a summary statement on the situation of international students during the COVID-19 disruption.

International students working in nursing and aged care have had their 40 hour per fortnight cap on working eased, as have students working in supermarkets until 1 May. While that is helpful for some students, as of 2016 the majority work in other occupations, as the chart below shows.

In its statement, the government makes the point that as a condition of their visa students must show that they can pay fees and living expenses for their first 12 months. Legally, that is a strong argument but it is probably an area in which visa applicants are not always entirely truthful. And most higher education students need to finance themselves for more than 12 months.

As the chart below shows, again using 2016 data, more than 40 per cent of international students who have been in Australia for less than 12 months report wages as their main source of income. The proportion relying on wages increases as they stay longer. 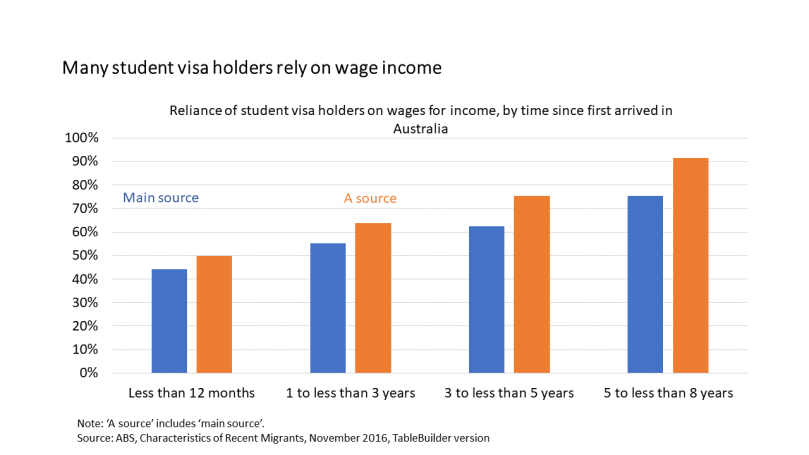 As Peter Mares has long argued, Australia has created a large population – nearly 1.8 million, at last count – of long-term but temporary visa holders without properly thinking though the social, economic or political consequences.

What happens to temporary migrants in a major crisis is one of the issues that needs a policy, especially when it will not be easy for many of them, as the prime minster suggested yesterday, to go home.

The general principle of reciprocity in the Australian welfare state is a reasonable one, so that the right to draw on benefits is linked to paying or being likely to pay taxes over a long period of time. Given that, it is fair to ask temporary migrants to arrive prepared for foreseeable costs and risks, such as the requirement to have health insurance.

But major adverse events that temporary migrants can neither predict nor control are in another category. To me, protecting them in such circumstances is one of the risks Australia takes on as a community in order to get the benefits of temporary migrants. We already do this in some ways; when the police or fire brigade are called nobody checks your citizenship status. These rights to assistance apply in narrowly-defined circumstances and for limited periods, as with the COVID-19 crisis.

Social security benefits aside, it is not clear why international students and other temporary migrants should be excluded from the JobKeeper payment. This policy is as much about business continuity as personal welfare:

The JobKeeper Payment will support employers to maintain their connection to their employees. These connections will enable business to reactivate their operations quickly – without having to rehire staff – when the crisis is over.

The visa status of a worker has nothing to do with how necessary they are for a business to re-start after the COVID-19 crisis is over. The policy could have very odd results. The 2016 ABS recent migrant survey found that the accommodation and food services industry, already devastated by a government decision to largely close them down, is the most reliant on temporary migrants (more than 9 per cent of all staff).

Indian and Chinese restaurants might find themselves with many ineligible employees, while restaurants serving cuisines less linked to recent migrant countries of origin will have more eligible staff. It seems arbitrary and unfair for the businesses and their customers as well as the temporary migrant staff.

Apart from health considerations, the most important aspect of public policy right now is minimising the number of organisations that collapse due to the COVID-19 shutdown and recession. More flexibility on how temporary migrants are treated during the COVID-19 crisis would help with that goal.* It would reduce the risk of disaster in the higher education sector, as well as in the many small businesses that rely on temporary migrant workers.

* While sounding well short of what is needed, today’s statement did also say that ‘the Government will undertake further engagement with the international education sector who already provide some financial support for international students facing hardship.’

3 thoughts on “International students and the COVID-19 recession”